I can probably count on one hand the number of times I’ve agreed with Luther Lowe, Yelp’s VP of Public Policy who no doubt helped pitch and secure this story on 60 Minutes.

Local search features prominently, and it’s exceptionally well-executed by the 60 Minutes team. I don’t see the U.S. regulatory environment changing anytime soon, but I applaud Luther and Yelp for successfully elevating the issue of Google’s massive dominance to mainstream awareness.

Google’s lack of in-person response is typically contemptuous, and their written response is telling (though probably accurate): positioning themselves in relation to Amazon and Facebook, not the Yelps and TripAdvisors of the world.

It’s hard for me to envision a fair breakup of just one tech giant — it probably needs to be all-or-none in order to truly level the playing field.

The Big Gmail Update—Here’s Everything Email Marketers Must Know

Google’s not quite as dominant in the email arena as they are in search (most studies show around a 30% market share) but the April Gmail / GSuite update is still important to note.

Of particular interest is the auto-suggested unsubscribe callout for email subscriptions that readers don’t engage with over a certain time period. (The example cited shows one month, but Google’s representative suggests this is based on frequency of delivery, not necessarily a fixed number of days.)

This puts even more pressure on companies to send content that their subscribers actually want to read, which selfishly I’m happy that Tidings helps enable. 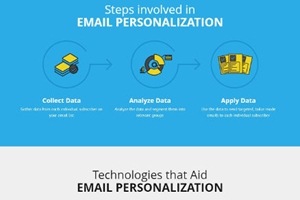 Email Personalization: The What, Why, and How of Hyper-Personalized Email

There are so many more important email personalizations than using someone’s first name in the subject line — at the top of my list, anyway, are proper segmentation and relevant content.

We’ve got big plans for Tidings to help you with both of those that we’ll be releasing in the next few months!

While I personally dislike the infographic format for presenting non-graphical content, the information this one contains is pretty great.

At first glance, this seemed like an un-believable statistic. But the company performing the study (SuperOffice) looked at a specific 90-day window, in which case I can totally believe it.

So many companies I talk to think a quarterly (or even longer) touchbase with their customers is the appropriate cadence. But in order to reap the full benefits of email keeping you top of mind, you really need to send on a more consistent cadence.

Almost as interesting as the study itself is the comment from industry guru Gordon Borrell with his firm’s corresponding data on US SMB’s! Roger Montti highlights a new algorithm that may enable Google to keep people on its search result pages in areas far beyond local search.

Sure, we’ve already seen pieces of this algorithm pulling featured snippets of content to the top of the SERPs, but we may soon see entire articles built algorithmically and automatically.